from BkMk Press, University of Missouri at Kansas City
The Other Side  - 1973
Before the Light - 1987

Poet in Cow Town - My Kansas City Years
Poet in City Hall - My St. Louis Years
Poet in Sonora - My Tucson Years
On the Wall and On the Page - poems on paintings, sculpture, & photographs
Inquiries - Poems Posing Questions
Cosmic Questions - Poems in Our Galactic Moment
Mortality and Other Hassles
In the Company of Animals - Poems & Prose on the Path to a Peaceable Kingdom

- for more information, excerpts, & links for ordering, please scroll down

It is nothing
yet - a lull,
a buzz of potential.

Warm in pale green
fluid it floats,
amorphous, without age.

Then the green
swirls and foams
flings it up, out

into a stinging blue
dazzle and sharp
immobile lines.

The sea gushes.
Stuck in the rocks
something wants breath.

Now it crawls across the sand
and aches with metamorphosis

already acquiring contours
and a steady pulse.
BEFORE THE LIGHT
from The Classic

The projector whirrs on
the sound track sounds
the images live, defy
common sense again, just as
that first proof did:
the racehorse stepping, stepping
all four feet at once up
sailing over the ground.

There in the
crowded dark you love it.
You don't care
what the story is.

from Before the Light

Aurora
over mountains
warms the plateau
spills slow
down the canyon:
black rock
crumbles, frosted grass
shifts, pinon, Ponderosa
grow and hear
the creek speaking
against pebble and ice.
If
anyone is here
they know the light
is coming
up the canyon,
know they will see
one more time
the cold gold explosion
in the cottonwoods.
- Bandelier, New Mexico
October, 1983

THE GHOSTS - Notes From a Field Study
Their Origins

The evidence clearly suggests
they came from the stars.

Just how and when may
never be known -- no more

than we may know which
of our body's molecules

came from our sun and which
from somewhere else entirely.
SONGS FROM WALNUT CANYON
Last Singer
(1200 A.D.)

I am the last

I will stay
here
sit in the sun --

Finally, from the east, our own star rises
above the white curve of Kaibab limestone,
its light pouring over the plains to flood

down the crumbling esplanade, splashing
out over Tonto Platform peninsula,
pausing at the rim of the inner gorge

and cascading down to the river whispering
in its dark Precambrian channel.  The light
grows stronger. Dry heat climbs the walls.

Ahead is another day of hikers, copters,
and noise.  Above the heat, beyond the blue,
the stars burn on - bringing other dawns.
SEARCHING FOR MR. STEVENS
Relative Seasons

Winter depends on your exact spot
on the earth -- a few degrees
of sun-angle changes everything.

Wallace Stevens, for instance,
took winter right between the eyes
every time, as if there were only

Connecticut on the one hand
and on the other, Florida.
There are other locations. There is,

for instance, Oklahoma, where
I write another season, noticing
how in December the grass

under snow around blackjack oaks
inspires voluptuous
coronas of green.

THE STRUCTURE OF THE BODY
The Life of the Body

The fluoroscope shows us
as a halo -- only the bones

last a while -- but before
we shrug it off

into senseless forever
we must do the beast

homage: keep every cell
well fed, give all

the playful parts lots
of play, and try not

to cry in front of
your wrinkles -- they are

so shy that they can
turn evil easily and burn

into the real florescence:
the you beyond all scope.
FIRST KINGDOMS - Poems from a Vanishing Landscape
Baby

In your first
six months--
they tell you this
much later--
you love
living warm
on the breast
you are such
a good baby
you sleep
all night, don't
cry much, pee
once in father's face
and they all
laugh and laugh -
all this
baby devotion
not very long
after the Japs
zapped Pearl Harbor.

VERMEER IN WORDS
Vermeer in Miniature

Born the second child
of Reynier Janzoon Vos
and Digna Baltens
not long after the Spaniards
stopped their slaughtering
and burning, you
never even considered
leaving Delft. You were
painting hard when Holland
turned Protestant and you
turned Catholic, mainly
to marry Catharina Bolnes
and make fifteen babies -
four dying young, while
you painted slowly, every day,
each fleck of pigment
as precious to you
as the spermatozoa
and red blood cells
van Leeuwenhoek saw
swimming under his fine lenses.
When you died penniless,
Catharina hired him as an agent
to sell off all your paintings.

The sun rules
rock and saguaro.

Tuscon
is a mirage -- you

are a mirage.
Cicadas

blaze away
another century.
NEW MEXICO NOTEBOOK - Late Summer in the Mountains
Dozing in the Car on the Way to New Mexico

Out past Amarillo, the horizon
slides away under gray clouds.

The rain comes and goes, comes
and goes. I sleep deep.

Later, I read aloud a chapter from
Keneally's Woman of the Inner Sea:

Kate has lost her children, lost her
cheating, criminal spouse

and her lover, the dynamiter Jelly,
and now, after the flood, takes off

for god knows where.  Our Kate
is desolate but brave enough

to endure "loss after loss."  I doze.
When I wake, the rain has stopped,

the skies have cleared: New Mexico
shines in blue distances, all the way

to Angel Fire, where we will walk
together - in clear metaphysical air.

TIME AFTER TIME -  A Novel in Verse
Sarah's Revelation - I

You will find
everything
upstairs, wrapped
in newspapers.

By the time
you read this
I'll be
gone to dust,

I suppose.
Where
they went
I have no idea. 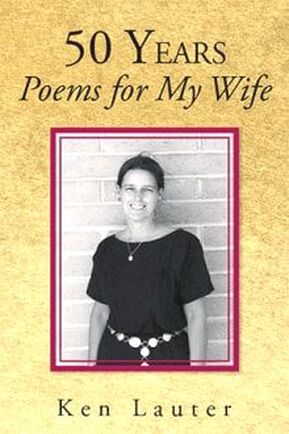 The poetic diary of a marriage lasting half a century, this collection
sketches out the life and times of Ken and Judith Lauter. They met in 1965
in a poetry-writing seminar taught by Donald Hall (US Poet Laureate,
2006-07) at the University of Michigan, where they both won Hopwood
Awards for poetry. They have subsequently lived in Tucson, Denver,
St. Louis, Oklahoma City, and their current home, Nacogdoches, Texas.

At last, my love has come along
- Etta James

spoke of image, meter, metaphor.
(He and Hall appreciated her
in every way they could.)  You must

get to know her! he thought--
Would Hall help?  Grinning,
Hall did and he did— at last, at last.


Why Did We Last?

Was it merely genetic,
an evolutionary accident
that braided our minds
and hearts together like
the DNA double helix?

Was it cultural, a middle-
class scent as strong
as some musky perfume?
We were both so lonely
in the sad way that only

the smart kids are, knowing
the chances of finding
another one were slim.
Yet we found something
in our faces, bodies, touch

and look, that would prove
indispensable, as much
as our love of language,
the music of poetry heard
deep, deep in the inmost ear.

We have taken our lives into our own
hands— like potters spinning clay,
wet and smooth-grained, yielding

to skilled fingers and the control
of mind— or, in our case
the union of two true minds

who have shaped a life together
across spinning time for
five decades.  What we crafted

is not flawless, not fired to some
exotic glaze— but it has found
its own form, its loving function. 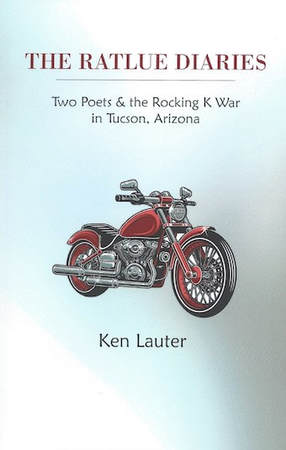 A fictionalized memoir about an environmental battle, this book records a
five-year struggle to prevent the urbanization of the beautiful Rincon
Valley in Tucson.  Told in poetry and prose by two poets, one of whom is
the author's alter ego, these characters become embroiled in the Rocking
K War (named after an old cattle ranch in the valley).  The book has the
hair-on-fire gonzo-journalism style of Hunter Thompson— satiric, profane,
rapid-fire, and filled with righteous anger and despair.  The poems
alternate between political diatribes and lyrics celebrating the harsh
beauty of the Sonoran Desert.

On a late May Saturday morning, cool breezes ruffle the curtains of the bedroom window. Floating up from sleep, I hear a mourning dove, calling coo-ooo, coo-ooo.  It’s perched in the big palo verde at the front of the house, a male bird making courtship calls before launching himself into a short flight that ends in a sloping glide back to the tree, flaring his white-tipped tail feathers for any female nearby to notice and (he hopes) relish.
Then comes the soft chirring of a Gambel’s quail, a female with several peeping chicks.  The bird family is heading to the small cement pool beneath a saguaro just outside our front door.  They sip and flutter in the water for five minutes or so before zipping back to the safety of mesquite and prickly pear.I walk out into the desert heat to get the mail— past the saguaro, the little drinking pool, the palo verde hung with pale-gold blossoms.  At the roadside, I stop and look around: to the east, the Rincon Mountains and blue-gray Mica Peak; to the north, a mesquite bosque and foothills rolling away, thick with saguaro, rising toward the high distant ridges of the Catalina Mountains.
From the mailbox, I grab a handful of junk mail, bills, a rejection letter from a poetry journal, and a large brown envelope: PIMA COUNTY PLANNING AND ZONING COMMISSION /  NOTICE OF REZONING APPLICATION FOR / THE ROCKING K RANCH AND ADJOINING LANDS
The sun suddenly grows hotter, beads of sweat pop out on my brow.  Turning back to the house, I hear something strange, almost ghostly— a motorcycle engine.  That guttural growl can only be a Harley.  I peer up and down the street but see nothing.  The motor revs again.  I can’t localize it.  Is it coming from the north, south, east, or west?  It seems to be everywhere and nowhere, almost as if it were inside me— then nothing but the sound of wind across the mesa.

bats zig-zag
across
a darkening sky

Sonora
and you— here,
home at last.

When Power arrives
he doesn’t bother
trying to look like
Truth, Reason, or Sanity.

When Power speaks
he doesn’t use
a loudspeaker
or an official letter.

He sets a beautiful table
with a silk tablecloth
and then announces
that you are on the menu.

If you don’t want to be
roasted and served up,
leave the table--
go home and write poems.

The last time I saw Ratlue was on a gorgeous spring afternoon.  We rode double on his Harley up to Sabino Canyon, parked it under the cottonwoods by one of the pools at the canyon mouth, and walked the rest of the way up.  There was no one else in sight.
In those days, before the tourist trams with loudspeakers, Sabino was one of the best places on earth, a nexus of peace and beauty.  It was a warm day.  Gnats swirled over the bends of the creek. Cottonwoods rustled in the breeze, dropping leaves onto the water.  The sun leaked rose and gold down the sheer rock walls.
We walked along silently past the picnic benches and boulders, watching fading light high on the cliffs, listening to the gurgling water.    .   .  Then Rat barked out:  Look!  It’s a Great Purple Hairstreak!  .   .   .   .
Fucking cool, Rat said—so clean, so simple.  I’ve tried to write a poem about it for years.  They all got burned in the urn.
Maybe this year will be different, I said.
I doubt it, he answered.

Wise creatures seek
shade under mesquite.
Sit down there, alone.

Hear your heartbeat,
your breath, and
the small bugle and flutter

of a quail drinking,
and the water sounding
its slow drip, drip, drip.